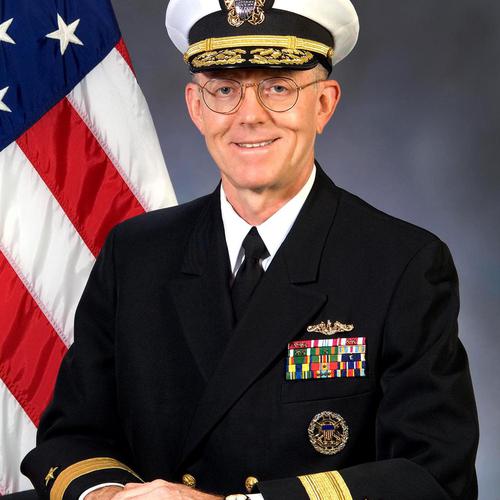 Rear Admiral Fred Byus, USN (Ret.), is an Adjunct Professor of Engineering Management at the Catholic University of America in Washington, DC where he teaches Master’s degree students in Cyber Security and Planning and Control of Organizations. He started Future Force LLC, a DC consulting company focused on rapid technology insertion to sustain US undersea dominance, in March 2018. Rear Admiral Byus is a member of the NOAA Office of Maritime and Aviation Operations Standing Review Board.

Previously with the Battelle Memorial Institute, he advanced to be General Manager of the Mission and Defense Technologies Business Unit where he oversaw all Maritime, Aerospace, Ground Vehicles and Tactical Equipment business lines and maritime subsidiaries. He worked closely with the CEO of SeeByte, LTD, a world leader in undersea autonomy and a wholly owned subsidiary of Battelle as Chairperson of the Board of Directors. He also served as President of SeeByte, Inc. a US wholly owned subsidiary of Battelle. He previously served as a Board Director of Bluefin Robotics. Rear Admiral Byus came to Battelle directly from the United States Navy where he had completed a highly successful 31-year career with experience in nuclear engineering, command and control of fleet and joint force operations, submarine warfare, anti-submarine warfare, financial management, training and assessment, and oceanography. While in the Navy Rear Admiral Byus served as Oceanographer and Navigator of the Navy with responsibility as Policy Adviser to the CNO on the Naval Oceanography Program, Ocean Policy and Navigation; Naval Deputy to National Oceanographic and Atmospheric Administration. He had also served as Commander US Naval Forces Korea, as US Seventh Fleet Chief of Staff, and as US Pacific Fleet Director of Operations (N3). He had submarine command tours as Commanding Officer of USS Tautog (SSN-639) and Commander, Submarine Squadron Seven. Rear Admiral Byus is lifetime member of Naval Submarine League and is a member of The American Society of Naval Engineers (ASNE). He currently serves on the Board of Directors of the Navy Sea Cadets Corps. He serves on the Naval Submarine League Advisory Council and Editorial Review Board for The Submarine Review, the quarterly review of submarine matters.